These were a set of comments on blog post by Jack Point titled Then they came for the Christians.  I gave some lengthy comments.  My initial reply was based on the implied assertion of the article that it was only Buddhists who were attacking churches.  Given the discussion issues on religion thought the comments should be put on a post. 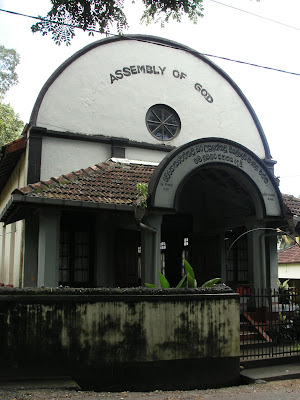 I also have a cousin who is an Evangelist pastor (and a former diver) in the deep south Balapitiya/Hikkaduwa/Galle area. I know the congregation and I lived in the area (Dodanduwa/Pinkanda) for some time.

My cousins observation is that they never have problems with the priests of the wealthy temples. So what comes across is that its competition for influence over the poorer and emotionally vulnerable segment of society. You get a wealthy segment also attached to Evangelist churches (e.g. AOG in Colpetty) but thats mainly in the large towns. So some of the Catholic/Buddhist priests with poorer constituents resort to harassment when they see their numbers and influence eroding.

Lot of interesting dynamics, interesting stories (to me at least, as I am atheist/agnostic). I get to hear both sides of the story, specially when I go to the nearby estate to drink toddy (ra).


Jack Point replied
Thanks for that comment sbarrkum.
The evangelicals tend to prey on the catholics and the other established churches so that is the source of conflict.
I dislike all form of religious extremism, religion should be a private matter and the public at large should not be disturbed or inconvenienced as a result of religious observances.

Prey is probably quite extreme word. What happens more often is that the poor/lower segments of society are accepted as equals and lot of community support.   Among the wealthy an Evangelical church looks attractive during times of an emotional crisis.

a) Example the husband would be out in deep sea (Tanki Bottu) for weeks. The wife just had a child and no family support because until becoming Christian the husband had been ganja/booze fiend (I knew the guy before and after). Someone from the church would always be visiting to give support. That just reinforces the example. These were die hard Buddhists on the beach side in Dodanduwa. So much so a year or two later when the father died, they had Christian rites.

b) Tamil family in Dodanduwa. Not estate Tamils though most people think so. Father had been from Kerala (I think) worked on fishing boats and ended in Dodanduwa. Again acceptance by the community has made pretty much the whole family Christian.

This second example dynamics I see working in the Estates. Catholics or Buddhists could have invited them to Temple/Church. However, the congregation should also be accepting and treat them as equals. This does not occur in Church/Temples. However, in Evangelist churches, the congregation is more than (than less) accepting of all.

I am not a big fan of Evangelical Christianity but see that it helps people who have fallen through the cracks of society. Much like the Black Muslims/Nation of Islam in the US


Jack Point replied
You are probably right. The examples you cite are a positive side that I did not know existed, thanks for that info.

Have you heard anything about the Four Square Church? This is a "church in a kit" franchise that is reportedly expanding rapidly in the N/E?

My biggest concern with the evangelicals is that some are a front for financial fraud - they insist that worshipers pay a tithe - donate 10% of all their income to the church. There is no proper accounting for the money and the church organisers/pastors/leaders seem to spend this on themselves, leading a life of luxury.

I know of a medical doctor turned pastor who has given up his medical practice and who seems to lead a very opulent life on the donations he receives. He runs his own worship centre, unaffiliated to anything else, so he pockets the entire tithe.

BTW, the financial fraud is a big issue in the US.

Also, have heard stories (of some churches) that people who recruit to the churches are paid a commission, the money being recouped in the regular tithe received from members.

In Judaism ma'aser kesafim/Tzedaka they give 10% and in Islam Zakat of between 2.5 and 20% (Note similarity of words Tzedaka and Zakat). Christianity has a 10% tithe and the Old Testament basis for Tithes is the same as for Judaism. Judaism, Christianity and Islam are based on the same foundations, but dont tell that to an adherent, they will have an apoplectic fit.

Now for the corruption issue. Yes, absolutely. Money corrupts and lots of money corrupts a lot. Thats true across all religions, organizations social groups what ever. You don't get too much corruption at the village level. They barely get enough to support themselves, i.e. pay for church electric bill etc. In my cousins case, he gets money from another cousin (they are loaded) for capital projects. That said I know of a couple of people who started as very poor Pastors many years ago and live a very luxurious life now.  Lot of this insight is because my Grandparents (from my mothers side) were the first to support the AOG and Ceylon Pentecostal Mission in the South. They built the first evangelical Church (before World War II) and also supported the European missionaries. At that time the European missionaries were poor. (Think NGO workers compared to Upper Middle Class Colombo types, but much bigger differences). That changed in the 50's with the Europeans being more well off.

Individuals start of with the goal of helping society thru religion, social service, whatever. As they become successful they feel they are entitled to greater share. Think Sathya Sai Baba, the multitude of Gurus in India (and US) and some of the Buddhist priests in Sri Lanka.

Now for the Kicker
Some of this corruption or misuse of funds can be controlled by having legislation to ensure all these entities are registered as Non-Profit organizations subject to audits and published accounts each year (Even that has not made much dent in the US).  Do you think Buddhist Temples and Hindu Temples will agree to this rule.

You and I may not think so, but these entities must be providing some service, emotional support whatever. Just like any other extortion racket like government taxes, if the service is not sufficient for whatever form of payments rendered, people will stop paying or find ways to get out.

Four Square Church: Never heard of it but they have a website http://www.foursquare.org/. Seems like a ponzi multi-level marketing scheme.


Jack Point replied
Thanks for the insight sbarrkum :)
Agree on the need for accountability.
I guess people will move out, on their own, if they do not see some benefit in it.
My attitude towards religion is somewhat coloured by Abraham Kovoor's polemic....:)

Email ThisBlogThis!Share to TwitterShare to FacebookShare to Pinterest
Labels: Religion and Rituals, Society