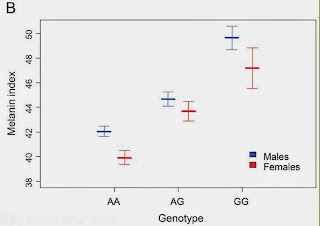 Recent study shows association rs1426654 SNP with skin pigmentation, explaining about 27% of total phenotypic* variation.  Previous studies have showed that rs1426654 SNP accounts for lighter skin in Europeans but not in East Asians.

Basically for South Asians if rs1426654 SNP is AA then light skin, if AG then medium dark and GG dark (see graph).  My rs1426654 is AG and I am medium dark. Also see this post on my DNA and heroin addiction etc.


We date the coalescence of the light skin associated allele at 22–28 KYA. Both our sequence and genome-wide genotype data confirm that this gene has been a target for positive selection among Europeans.

One of the key pigmentation genes in humans is SLC24A5.  That a non-synonymous variant (ref SNP ID: rs1426654) in the third exon of this gene explains 25–38% of the skin color variation between Europeans and West Africans. The ancestral (G) allele of the SNP predominates in African and East Asian populations (93–100%), whereas the derived (A) allele is almost fixed in Europe (98.7–100%)

In India here is a general trend of rs1426654-A allele frequency being higher in the Northern (0.70±0.18) and Northwestern regions (0.87±0.13), moderate in the Southern (0.55±0.22), and very low or virtually absent in Northeastern populations of the Indian subcontinent (Figure 2, Table S6). Notably, the Onge and the Great Andamanese populations of Andaman Islands also showed absence of the derived-A allele.

Loss of pigmentation in eastern and western Eurasia seems to be a case of convergent evolution (different mutations in overlapping sets of genes), the H. sapiens sapiens ancestral condition of darker skin is well conserved from Melanesia to Africa.

The opposite is also true in that just because outward appearance is similar (phenotype) the genes (genotype) do not have to be similar. Example: Africans and Papua New Guineans though superficially similar are about the furthest apart genetically.
Posted by sbarrkum at 11/12/2013 06:23:00 AM