This blog post was inspired by Richard Simon's: Ceylon Tea: The Trade That Made A Nation. This is about an employee of the tea trade who had descendants who ended up in S Thomas College and eventually as academics.

Thillaiampalam- Valathu Udaiyar ( Arumugam) Thambipillai was the Head Clerk of the New Dimbulla Tea Company, Ltd in Agrapatana. He had a couple of children. Isaac Tambyah. and Thangamma Thambipillai were from his first wife.  Children from his second marriage were Karakulasingham, Thillainayagam, and Nesamani. (updated based on info from Jey)

Karalakulasingham, obtained first class Honours in B.Sc.,  one of the few who obtained a first class at that time.   Initially worked at the Colombo Observatory. With failing eyesight he left the observatory and became initially a teacher at Trinity College, Kandy and later a lecturer at the Teacher Training College. He was a contemporary of Fr. Peter Pillai, founder of Aquinas College (a brilliant academic who chose to become a priest). One of Karalakulasingham's son  RNSK Karalakulasingham was a iconic math teacher and Boarding house master of S Thomas College.

Thillainayagam. died young after having only one child Thillainayagam Robert Thuraisingam.  Robert Thuraisingham worked at the Inland Revenue Department (earlier known as the Tax Dept) and  retired as a Senior Assessor. Some Thomians may know him personally as he tutored many from his home at Moor Road, Wellawatte.

Robert Thuraisingam's son is Ranjit Thuraisingham who was first a Thomian, then armed with a B.Sc( Hons) from  University of Colombo went onto obtain a Ph.D in molecular quantum mechanics from Cambridge in 1975. Conducted research in molecular quantum mechanics, statistical mechanics, physical chemistry, acoustic scattering, signal processing, and in nonlinear chaotic systems.

Issac Tambyah, (19th Aug 1869-1940), was educated at St. John's College, Jaffna. then at St. Thomas, College, Colombo. At S Thomas College he held the Divinity scholarship till 1891 and was Liturgy Prizeman, besides editing the College Magazine.

Qualifying as a lawyer Issac Tambyah practised in Jaffna until 1901 and then in Colombo until 1913. In 1912 he was called to the Bar, Gray's Inn, and proceeded to Malaya the next year to set up in practice there. He soon made a name for himself in politics and the law while at the same time not neglecting his theological studies. While in Malaya he obtained the degrees of D. D. and D. Th.

Returning in 1924 Dr. Tambyah forsook the law and was ordained a Deacon. Two years later he was ordained Priest and appointed to St. John's Church, Chundikuli. He remained here till 1938 when he went as Priest-in-Charge, Bandarawela. Early in 1940 he was transferred to Holy Trinity Church, San Sebastian and died at the age of 71 years. At the time of his death he was Vicar of Holv Trinity Church, San Sebastian Vice-Principal of the 'Divinity School', Colombo. He was married to Mangalanayagam, daughter of the late Mudaliyar J. W. B. Kumarkulasinghe and his sister Elizabeth Nesamani was married to Mudaliyar A. Barr-Kumarakulasinghe.

Issac Tambyah was a man of wide culture and Catholic tastes. He founded and edited the "Ceylon Review"the first Law Magazine published in Ceylon. He was the author of the "Digest of the Law Contract" and "Commentary on the Ceylon Penal Code" and "Commentary on the Ceylon Labour Ordinance", besides editing the "Ceylon Law Review" and "Tambyahs Reports". While a law student Dr. Tambyah edited the "Law-Students Magazine' and the 'Period'. 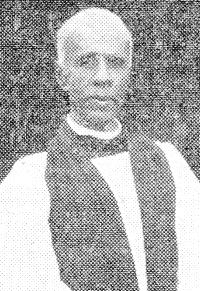 He also edited collections of poems by various writers and in 1897 came out with the "Garland of Ceylon Verse" the first collection of published poems written in Ceylon.

Issac Tambyah's wife Mangalanayagam Thambiah (nee Barr-Kumarakulasinghe) was the first female author in modern Ceylon.  She wrote in Tamil the novel "Broken Heart" in 1914. Reprints of the book are available at Kumaran House.
Tampaiya, Mankalanayakam (early 20), Christian authoress, of Jaffna, Sri Lanka: Novel Norurikunta itayam (Crushed Heart, 1914), excellent social novel reflecting extremely well the way of life of Tamils in Sri Lanka, exemplified on the story of two women, Kanmani and Ponmani. Kaiimani, after many painful experiences, hearing the sermon of a Christian priest, embraces Christianity, and dies resigned and in peace. In contrast to her, Ponmani obtains the husband she has wished for, overcoming thereby evil schemes of Kanmani 's husband and his brother, and gives the impression of a strong, even heroic woman of iron will. In placing the two protagonists in contrast, T. has achieved great distinction. The novel unfolds against the background of Christian communities of Jaffna. 1930 issue of Jaffna magazine Utayatarakai publ. another of her novels, Ariyamalar (Rare Blossom).  from Zvelebil, Kamil V.(1995): Lexicon of Tamil literature. — Leiden New York:
Thillaiambalam (Thillainayagam)'s brother is T Vinnasithamby - Author of " A Geneology of the Residents of Manipay". (sent by Jey)
http://www.noolaham.org/wiki/index.php/Maniampathiar_Santhathimurai:_A_Genealogy_of_the_Residents_of_Manipay_and_Related_Inhabitancies
Posted by sbarrkum at 8/22/2017 05:41:00 AM