The Numbers: Ethnic Cleansing and Diaspora of Lankan Tamils

There have been a few comments with accusations of Genocide, Ethnic Cleansing of Tamils by the Sri Lankan Govt.

Lankan Tamils Living among Sinhalese
35% of the Sri Lankan Tamils live in Sinhalese majority areas.
The numbers are from the 2012 census.  The third column (in Sinhala) are the Indian/Upcountry Tamils.  In comparison less than 1% Sinhalese live in Tamil majority regions.

Diaspora Sri Lankan Tamils
A number that has been thrown is 30% of Sri Lankan Tamils live outside the country.   The numbers say that it is 22%.
Not all of the Diaspora are refugees
a) Some migrate for economic and education reasons
b) The LTTE one child policy.  The LTTE required one child per family to become cannon fodder.   If the family had money, the LTTE would arrange to smuggle the child out to a Western country as a refugee. Thereafter the refugee would have to make monthly donations too. 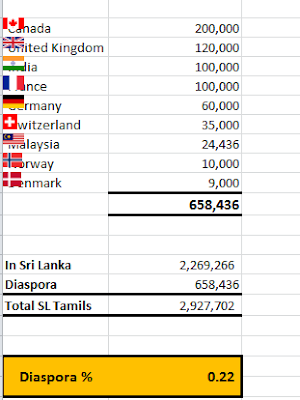 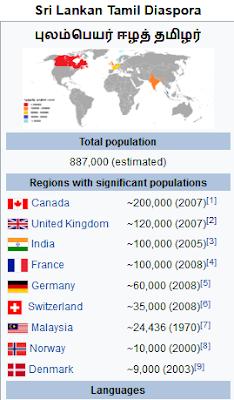