Are Indians Smarter Than Sri Lankans?

The Math Olympiad results seems to indicate Sri Lankans are about comparable to Bangaladeshis in Math capabilities (Approximately 70th rank). We Sri Lankans seem to be doing far worse than India and Brazil (23 and 20 respectively). Sri Lanka has a Math Olyimpiad organization too and has quite a bit of information on the site http://www.slmathsolympiad.org/ . Complete results of the Math Olympiad since 1959 is available here.


Another interesting comparison is IQ. Again we do not seem to be doing any better than the Indians. One must keep in mind that the Math Olympiad is about selecting the best in a country. The National IQ measure is for the country as an whole. India with half its population being illiterate still has an IQ quotient comparable to Sri Lanka. Does that mean Sri Lankans are not as smart as we think or they are just smart alecs who cant be bothered with IQ tests. Steve Sailer comments that new study of Sri Lankan IQ is warranted because it is highly literate, low malnutrition, similar racial makeup with South India...and the only study we have is one way back in 1954 with a sample size of 46, that too on eight year olds, when IQ is not very heritable. The IQ of 79 for Sri Lanka is quite meaningless in the present context

There is an whole discussion on Indian IQ over here. This location has a summary of the Lynn and Vanhanen study of IQ and the Wealth of Nations. This is the wiki with data of the controversial 2006 book by psychologist Richard Lynn and political scientist Tatu Vanhanen IQ and Global Inequality

Email ThisBlogThis!Share to TwitterShare to FacebookShare to Pinterest
Labels: Statistics

For those who pooh pooh this exercise, this is a really big issue. By law in the US Asset Management entities are required to keep within certain bounds the credit rating of their total portfolio. So in the next few days US Asset Managers ( I (Barr) assume similar rules for Europe and Australia) have to do the following to their portfolio.
a) increase less risky (higher credit rating) assets
b) Decrease less risky assets
For those who think they are going to make money on this news, just to let you know the smart money probably has already made their bets within seconds in after hours trading.

Apparently the Federal Reserve says to disregard this rating to govt agencies. Nice, forget about ratings when it does not suit you.

Earlier today, Standard & Poor's rating agency lowered the long-term rating of the U.S. government and federal agencies from AAA to AA+. With regard to this action, the federal banking agencies are providing the following guidance to banks, savings associations, credit unions, and bank and savings and loan holding companies (collectively, banking organizations).

Well, so much for the conspiracies. S&P has just released a scathing critique of the total chaos that this country's government has become. "The political brinksmanship of recent months highlights what we see as America's governance and policymaking becoming less stable, less effective, and less predictable than what we previously believed. The statutory debt ceiling and the threat of default have become political bargaining chips in the debate over fiscal policy. Despite this year's wide-ranging debate, in our view, the differences between political parties have proven to be extraordinarily difficult to bridge, and, as we see it, the resulting agreement fell well short of the comprehensive fiscal consolidation program that some proponents had envisaged until quite recently. Republicans and Democrats have only been able to agree to relatively modest savings on discretionary spending while delegating to the Select Committee decisions on more comprehensive measures. It appears that for now, new revenues have dropped down on the menu of policy options. In addition, the plan envisions only minor policy changes on Medicare and little change in other entitlements, the containment of which we and most other independent observers regard as key to long-term fiscal sustainability." What to expect on Monday: " it is possible that interest rates could rise if investors re-price relative risks. As a result, our alternate scenario factors in a 50 basis point (bp)-75 bp rise in 10-year bond yields relative to the base and upside cases from 2013 onwards. In this scenario, we project the net public debt burden would rise from 74% of GDP in 2011 to 90% in 2015 and to 101% by 2021." And why all those who have said the downgrade will have no impact on markets will be tested as soon as Monday: "On Monday, we will issue separate releases concerning affected ratings in the funds, government-related entities, financial institutions, insurance, public finance, and structured finance sectors." Translation: unpredictable consequences: you are welcome!

Joint Statement By The Fed, The FDIC, NCUA And OCC

And Just Because.... "Is There A Risk The US Could Lose Its AAA Rating?" Tim Geithner: "No Risk"

Peter Barnes “Is there a risk that the United States could lose its AAA credit rating? Yes or no?”

Geithner’s response: “No risk of that.”


USSAAA - S&P Reconsiders Downgrade After White House Challenge
meet Chicago-style negotiations. And there, in one sentence, is all that is broken with this country. The reason for the beyond ridiculous horse trade, according to CNN: S&P analysis of U.S. revenue, deficit picture was questioned. Presumably S&P ignored to add the $10 quintillion dollars that were saved by America not declaring war on Tatooine and its most infamous Hutt resident: Larry Summers. Indeed, again according to CNN, S&P acknowledged some errors in its analysis. Isn't it amazing what being threatened with having your NRSRO license can do for motivation to double check your work, eh you pathetic sellouts? Who would have thought that last week's farce debt ceiling would continue and develop into a national pastime. Below, for the sake of S&P's non-existent conscience and incompetence, are their own guidelines for what constitutes an AAA-rated credit. Readers can decide if the US is one. In other news, in USSAAA, government downgrade rating agency.
Posted by sbarrkum at 8/06/2011 01:09:00 AM No comments: Links to this post

Email ThisBlogThis!Share to TwitterShare to FacebookShare to Pinterest
Labels: Global Crisis, US 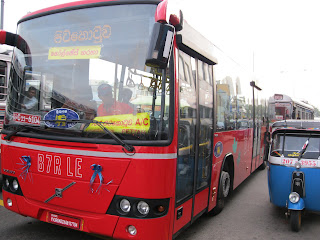 CTB (SLTB to be exact has AC buses running from Moratuwa to Pettah. Currently only two buses and within the next few days two more to be added. By the end of the month they expect to have fleet of forty buses. Some of the buses are to be deployed on the Southern highway which apparent scheduled to be opened on August 15th. The fare from Pettah to Galle is to be LKR 350/=. The Fare from Bambalapitiya to Pettah was LKR 26/=.

Update
As of Jan 2014 (and earlier) the Southern Highway Buses run only from Maharagama .  The fare is LKR 500. Journey is one and half hours (none rush hours) from Maharagama to Galle. It seems like the private buses have less air conditioning compared to the SLTB buses.

The worst public bus station toilet is in Maharagama. Much worse than Chilaw which is quite bad to start with. Surprised no one has complained. 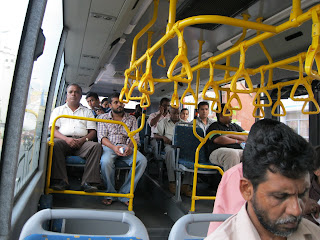 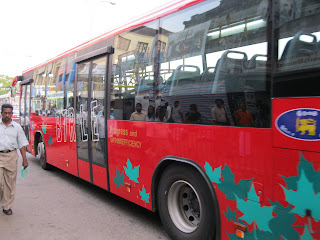