Who was worse JR or MR 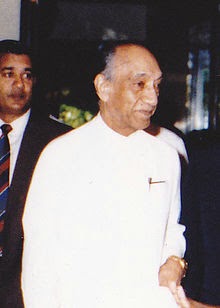 I am a Sri Lankan and part Tamil.  One who did not even bother getting a green card after living and working for  22 years in the US (Student Visa and 3 H1B Visas).

Everyone else conveniently has forgotten JR Jayawardena the architect of the 1978 Executive Presidency.

I have not forgotten.

JR The one who after the 1983 riots said in Daily Telegraph," Really if I starve the Tamils out, the Sinhala people will be happy.

There has been nothing worse than the 83 riots in Sri Lankas modern history. It was state sponsored and the goons had a list of tamil houses. They came to our house and it was the "singhe" ending and my sisters and mothers fluent Sinhalese and light skin that spared us.

You could not travel around the country, if you had a tamil name (I have a very tamil middle name) you were harassed at every check point.

My mother and father were traditionally UNP ers except for once my mother voted for Mrs Bandaranayake.  Woman support.

My mother and sisters still support Mahinda Rajapakse because of the peace he brought to the country.  And we dont have even a remote connection to the Rajapakse corriodors.

Even at lesser level we can keep our windows and doors open because there are almost no drug addicts (kudu karayas) ready to steal the smallest thing,

On the ethnic question, Jayewardene's legacy is bitterly divisive. When he took office, ethnic tensions were present but the country as a whole was at peace. By the end of his tenure, Sri Lanka was facing not one but two civil wars, both featuring unprecedented levels of violence and brutality.

MR has done nothing even close and the country is at peace.

Though Jayewardene indeed did not take measures to stop the attack on Tamils, he was not opposed to them personally, only politically. One of his most esteemed friends was a supreme court judge of Tamil ethnicity, a member of an elite family and raised in Colombo, but who was strongly linked to his Jaffna Tamil heritage. This is but one close Tamil friend of the president's, and it is quite clear that he was not a racist but rather a man who knew how to exploit racism to win the majority.

Jayewardene moved to crack down on the growing activity of Tamil militant groups. He passed the Prevention of Terrorism Act in 1979, giving police sweeping powers of arrest and detention. This only escalated the ethnic tensions. Jayewardene claimed he needed overwhelming power to deal with the militants. He had likely SLFP presidential nominee Sirimavo Bandaranaike stripped of her civic rights and barred from running for office for six years, based her decision in 1976 to extend the life of parliament. This ensured that the SLFP would be unable to field a strong candidate against him in
the 1982 election, leaving his path to victory clear. This election was held under the 3rd amendment to the constitution which empowered the president to hold a Presidential Election anytime after the expiration of 4 years of his first term.