US Stocks: Set for Crash ? 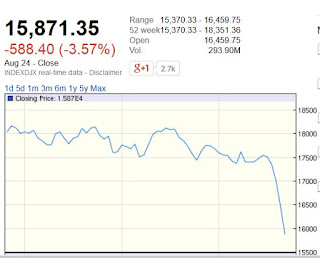 The US govt pumped in free money in the form of low interest rates and Quantitative Easing (QE).  This mechanism pushed up the prices of stocks.   However, in the long run this is not sustainable without a growth in the economy.

So basically the US Govt has to pump in about 2 trillion to prop up the DJI and S&P.  That is assuming retail and hedge funds and the like dont panic and keep selling.   That would be like trying to remove water with a bucket when there is 10 foot hole in a boat, a loosing proposition. Then there are secondary dominoes like Credit Default Swaps and Margin calls. That is a whole different article.

So what are the implications for Sri Lanka

Inequality of income, with predominantly low wage jobs for those who are lucky to have a job and
high rents and exorbitant college fees are forcing women to augment their income by finding a sugar daddy to pay the bill.

Enter SeekingArrangement.com   a website catering to men and women who exchange sex for compensation, like an allowance or paying bills like student loans and rent.  It has 4.5M registered users
The Economic Relevance of SA - It's where the 1% converges with the 99%.

It's not an online dating website.  If someone wants a relationship or a liaison, there are plenty of other sites like Craigslist and Ashley Madison.

Is it a prostitution website?  According to SA they are not, repeat not, engaged in prostitution.  Their disclaimer: "An arrangement is not an escort service.  SeekingArrangement in no way, shape or form supports escorts or prostitutes using our website for personal gain."

Seeking Arrangement: A Form of Prostitution, for the 1%.  As a prostitution website, it may not be as explicit as WhatsYourPrice or Backpage, but SA has at its core a business transaction: companionship with extras in return for cash and/or the equivalent.

Mainstreaming Prostitution: Beginning last year, the Bank of England included prostitution in GDP measurements.  According to the Office of National Statistics, prostitution generated $9B a year, adding 0.7% to the UK GDP.  They aren't alone: Sweden, Norway and a few other European countries already include it.  And if you can measure it, you can tax it.  And legalization is necessary for measurement.
Prostitution is legal in most of the developed world.  In fact, of the G20 countries, prostitution is illegal in just 5: China, South Korea, Saudi Arabia, South Africa, and, of course, the United States.