Iraq to US: We dont need troops 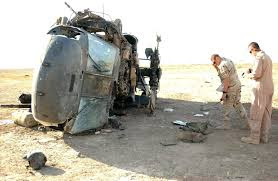 Now Iraq (you know the country the US liberated/occupied 13 years ago) says to the US, " This is an Iraqi affair and the government did not ask the U.S. Department of Defense to be involved in direct operations," spokesman Sa'ad al-Hadithi told NBC News. "We have enough soldiers on the ground."  Meanwhile the US has been considering sending more troops and Apache helicopters into Iraq.

i.e. Maybe Iraq will be asking Russia to help.  Time for the US to do a UNHCR investigation into "war crimes" and send UN observers/invasion into Iraq.  Oops, maybe that's out of the question, the US also might be implicated in "war crimes".


The Iraqi government said Wednesday it didn't ask for — and doesn't need — the "direct action on the ground" promised by the Pentagon.

Iraqi Prime Minister Haider al-Abadi's spokesman told NBC News that any military involvement in the country must be cleared through the Iraqi government just as U.S.-led airstrikes are.

"This is an Iraqi affair and the government did not ask the U.S. Department of Defense to be involved in direct operations," spokesman Sa'ad al-Hadithi told NBC News. "We have enough soldiers on the ground."

and in the US from the Wall Street Journal


The White House is seriously considering deploying a small squadron of Apache attack helicopters to Iraq as part of a package of new assistance programs to counter Islamic State, according to U.S. officials.

The move could ultimately require the deployment of hundreds more U.S. service members to Iraq. Among other proposals, U.S. officials said some in the military recommend openly deploying a small number of forces on the ground in Syria, embedded among moderate rebels or Kurdish forces there, for the first time.

Pressure is mounting on the regime to change course. Recent Russian intervention in Syria on the side of the regime, and the threat of Moscow intervening in Iraq next, has spurred the U.S. to step up its role, defense officials acknowledge.

US Hospital Bombing because Taliban was using Civilians as Human Shield

Initially the US defended the bombing of the Afghan Hospital as "Collateral Damage".  Now the latest justification is that “Taliban fighters are now hiding in ‘people’s houses, mosques and hospitals using civilians as human shields.'”  Isn't that the very same thing Sri Lanka was accused of; i.e bombing places where the LTTE was using human shields, which Sri Lanka denies.  This was considered a War Crime and the US wanted a International investigation.  So, will the US also agree to an International investigation.  I very much doubt it.  Definitely sauce for the goose is not sauce for the gander


U.S. military was predictable and familiar. It was all just a big, terrible mistake, its official statement suggested: an airstrike it carried out in Kunduz “may have resulted in collateral damage to a nearby medical facility.” Oops: our bad. Fog of war, errant bombs, and all that.

This obfuscation tactic is the standard one the U.S. and Israel both use whenever they blow up civilian structures and slaughter large numbers of innocent people with airstrikes.

But there’s something significantly different about this incident that has caused this “mistake” claim to fail. Usually, the only voices protesting or challenging the claims of the U.S. military are the foreign, non-western victims who live in the cities and villages where the bombs fall. Those are easily ignored, or dismissed as either ignorant or dishonest. Those voices barely find their way into U.S. news stories, and when they do, they are stream-rolled by the official and/or anonymous claims of the U.S. military, which are typically treated by U.S. media outlets as unassailable authority.

Fox News yesterday cited anonymous “defense officials” that while they “‘regret the loss’ of innocent life, they say the incident could have been avoided if the Taliban had not used the hospital as a base, and the civilians there as human shields.” In its first article on the attack, The Washington Post also previewed this defense, quoting a “spokesman for the Afghan army’s 209th Corps in northern Afghanistan” as saying that “Taliban fighters are now hiding in ‘people’s houses, mosques and hospitals using civilians as human shields.'” AP yesterday actually claimed that it looked at a video and saw weaponry in the hospital’s windows, only to delete that claim with this correction:

So now we’re into full-on justification mode: yes, we did it; yes, we did it on purpose; and we’re not sorry because we were right to do so since we think some Taliban fighters were at the hospital, perhaps even shooting at us. In response to the emergence of this justification claim, MSF expressed the exact level of revulsion appropriate (emphasis added):


“MSF is disgusted by the recent statements coming from some Afghanistan government authorities justifying the attack on its hospital in Kunduz. These statements imply that Afghan and US forces working together decided to raze to the ground a fully functioning hospital with more than 180 staff and patients inside because they claim that members of the Taliban were present.
“This amounts to an admission of a war crime. This utterly contradicts the initial attempts of the US government to minimize the attack as ‘collateral damage.’