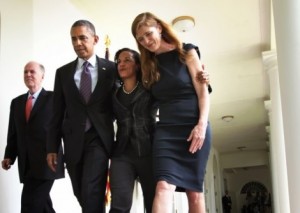 Obama on March 2011 said the following to Justify the war on Libya.


"For more than four decades, the Libyan people have been ruled by a tyrant -– Muammar Qaddafi. He has denied his people freedom, exploited their wealth, murdered opponents at home and abroad, and terrorized innocent people around the world –- including Americans who were killed by Libyan agents. (See complete speech here)

It turned out later in Obama had no evidence for his statement."


“We have seen no evidence that the UK Government carried out a proper analysis of the nature of the rebellion in Libya. … UK strategy was founded on erroneous assumptions and an incomplete understanding of the evidence.” “Despite his rhetoric, the proposition that Muammar Qadhafi would have ordered the massacre of civilians in Benghazi was not supported by the available evidence. While [he] certainly threatened violence against those who took up arms against his rule, this did not necessarily translate into a threat to everyone in Benghazi. In short, the scale of the threat to civilians was presented with unjustified certainty.”