Images of the Grand Canyon are the first to be taken by the company's Trekker platform, which allows workers on foot to collect 360 degree imagery with a back-pack mounted camera system.
'Our team strapped on the Android-operated 40lb backpacks carrying the 15-lens camera system and wound along the rocky terrain on foot, enduring temperature swings and a few muscle cramps along the way,' Mr Falor said.
Google's Trekker cameras capture images every 2.5 seconds with 15 cameras that are 5MP each. A removable hard drive on the trekker stores the data as it is gathered.
GPS data around the Grand Canyon is limited, so Google was forced to compensate with sensors to record temperature, vibrations and the orientation of the device as it changes. These details were essential to developers given the job of stitching them back together into seamless, scrollable panoramas.

Read more: http://www.dailymail.co.uk/sciencetech/article-2271298/Google-Grand-Canyon-View-Search-giant-expands-maps-include-virtual-tour-world-famous-natural-wonder.html
Posted by sbarrkum at 1/31/2013 06:41:00 PM No comments: 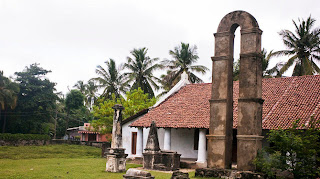 Kalpitiya, a spit of land two hours north of Colombo that boasts one of Sri Lanka’s least developed stretches of coastline, is flanked by the Indian Ocean on the west and the emerald green Puttalam Lagoon on the east. Now, before large resort developments at the peninsula’s tip come to fruition, is the time to visit. Base yourself at Alankuda Beach, which from November through April is the launching point for dolphin and sperm whale watching expeditions; May brings wind and kite surfing. Dry land diversions include a 17th-century Dutch fort and the Shrine of St. Anne, Sri Lanka’s oldest, as well as leopard, sloth bear and elephant spotting at nearby Wilpattu National Park. — Robyn Eckhardt