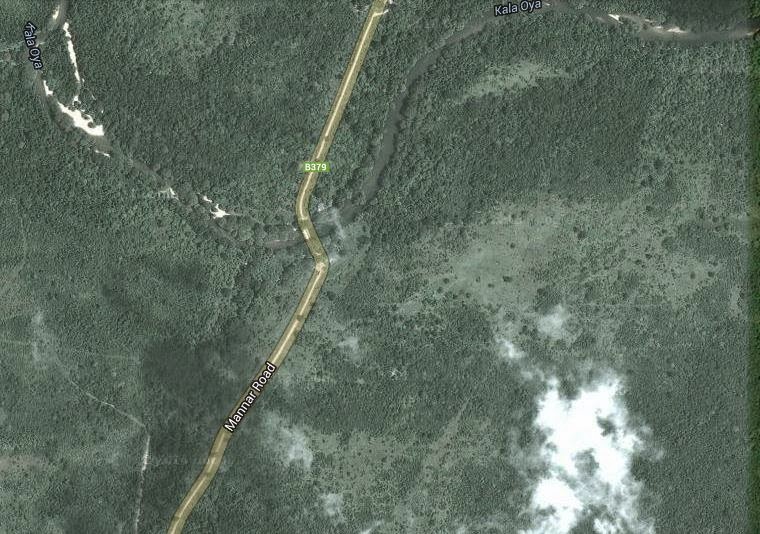 Colombo Telegraph has an article claiming that the Navy has grabbed 900 acres from the Wilpattu National Park.  It is factually incorrect in so many ways.  Excerpts and the proper view.

Who writes this rubbish.

located along the Northern border of the park
Northern Border and 2 km from Eluvamkulama, Really !!.
Eluvamkulama is on the southern border.

so far for about 2 km along the Eluwankulama – Silwathura road that was also constructed by the SLN illegally.
2 km from Eluvamkulama is outside the Wilpattu Park.
It is 4 km from Eluvamkulama to the Park boundary at Kala-Oya causeway boundary
The Eluwankulama – Silwathurai road is historical.  It was a cart track in the the Early 1900's before the Wilpattu National Park was created.  The road connected the populations of Mannar and Puttalam.  The road is still called the Old Mannar Puttalam road.

50 more acres of land in the national park have been impacted due to being cleared to obtain soil to build the massive nine inch rampart that is being built around the 900 acre land.
Dont know about the 50 acres,  The 900 acres is south of the Wilpattu Border.  Its an old tank (Achchimale tank)  that is being reconstructed to build the Puttalam Water supply being fed by the Kala-Oya.  See progress report in 2011

At the moment (Sept 2014) the earth being excavated is supplied to whoever is willing to pay LKR 300 for a tipper truck load.  Many in the surrounding village are using the earth to fill in low lying property.