Geopolitical Update: The Drums of War in he Middle East 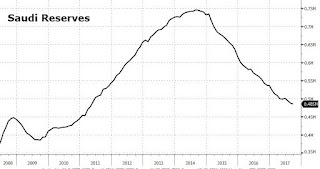 Geopolitical Update: The Drums of War in he Middle East

This is like watching hurricane track and hoping it wont hit you.

a) Saudi Arabia (SA) is running out of money. Foreign reserves have fallen dramatically. Low oil prices have been a big problem

b) Mohamed bin Salman (MbS) is doing a power grab. Made himself heir. Considered an unpopular move. Ousted many a couple months a year back.

c) SA population is growing fast as is the Royal Family. They all need to be paid off to keep them from revolting.
d) The war in Yemen started by MBS was to unite the country behind him. It was supposed to be a walkover. two years and counting and no victory for SA in Yemen.
e) Another purge and assets seized, estimated of 800 billion. Good for two years.
f) Purge is unpopular. So another war, Lebanon and Iran maybe to get the populace behind MBS.

The US is self sufficient in oil. No longer dependent on SA oil.
The US would like Oil prices to rise which is not possible with SA pumping away.
The SA-Yemen war was approved by US and kind of backed MbS.
US probably hoped it would destabilize SA. Anyway sold a lot of Aircraft and weapons to SA
SA might buy the most fancy weapons, but dont have the people to operate them.
So US is giving SA more rope to hang themselves.
Kind of egging SA to open a second front with Lebanon/Iran with the expectation that SA will fracture from within.
Another war and/or SA has civil war: Increased Oil prices and probably SA assets in US being seized. Mission Accomplished.