Another view of the Rohingya issue in Myanmar. 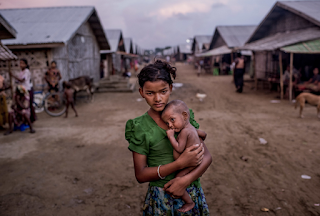 Another view of the Rohingya issue in Myanmar.

Apparently Ata Ullah the leader of the Arakan Rohingya Salvation Army (ARSA)  possibly had training under the Taliban.

excerpts from Moon of Alabama


While the ethnic conflict in Rankine state is very old, it has over the last years morphed into an Jihadist guerilla war financed and led from Saudi Arabia. The area is of geo-strategic interest:

Pipelines from the western coast of Myanmar eastwards to China allow hydrocarbon imports from the Persian Gulf to China while avoiding the bottleneck of the Strait of Malacca and disputed parts of the South China Sea.  It is in "Western interest" to hinder China's projects in Myanmar. Inciting Jihad in Rakhine could help to achieve that. There is historic precedence for such a proxy war in Burma. During World War II British imperial forces incited the Rohingya Muslim in Rakhine to fight Burmese nationalist Buddhists allied with Japanese imperialists.

There is no question that Rohingya have suffered discrimination.

However, it has now morphed into a Jihad. The jihad, fueled and funded by interested parties (US thru proxy Saudi Arabia) in order to destabilize Myanmar which getting into the Chinese Orbit.

The playbook is very similar to the LTTE and Tamils. India funded and trained the LTTE, to destabilize Sri Lanka which was coming into the US orbit. Of course the SL govt compounded the problem e.g. 83 riots authored by JR.

The current violence started in  October 2016. Atta Ullah's  group started to attack police and other government forces in the area. On August 25 2017 Ata Ullah's  group attacked 30 police stations and military outposts and killed some 12 policemen. The army and police responded, as is usual in this conflict, by burning down Rohingya townships suspected of hiding guerilla forces. To escape the growing violence many local Arakanese Buddhist flee their towns towards the capitol of Rankine. Local Rohingya Muslim flee across the border to Bangladesh.

Many say There is ample evidence of ethnic cleansing with impunity, perpetrated by the military government, which amounts to genocide.
So by the same logic, the  SL govt would be guilty of ethnic cleansing and genocide of Tamils ?. Really, thats a very serious allegation.

As Razib Kahn says " In the short-term the killing of infants and raping of women (if  true) has to stop. But these simple answers have behind them lurking deeper complexities. While agreeing upon the urgency of action now, we need to be very careful to not turn complex human beings into angels and demons. We have enough history in the recent past that that sort of model only leads to tragedy down the line, as those who we put utmost faith in fail us due to their ultimate humanity".

I would suggest a little more back ground reading on a complex issue without making statements based on a black or white view.