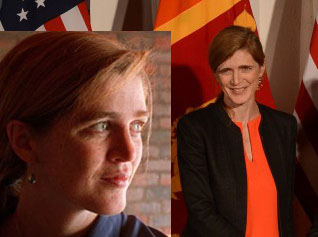 And why beholdest thou the mote that is in thy brother's eye, but considerest not the beam that is in thine own eye?
"Now is not the time for the U.S. to deprioritize the issues which could help heal a war-torn nation. Transitional justice, including accountability" writes Taylor Dibbert
For a start Samantha Power could help heal war torn Libya. The invasion of Libya was promoted by Samantha Power because of what she saw as "the failure of the United States to prevent massacre and genocide, time and time again" in her Pulitzer Prize-winning book.
Now that Libya is a failed state, because of a War of her own promotion, where Hillary Clinton said we "We came, we saw, he died" and then laughed. Now that the US does not even have an embassy Libya,  it seems Samantha Power is no longer interested in helping heal war torn Libya.  Absolutely no responsibility for consequences of her actions.
"The bitter truth is this: as a country Sri Lanka has never properly functioned for its numerical minorities".writes Taylor Dibbert
So, have the numerical minorities fared better in the US.
Sri Lanka has just 92 prisoners per 100,000. The US has 698 prisoners per 100,000 of which close to 50% are black AfricanAmericans. The US black AfricanAmerican population and the Sri Lankan Tamil population percentages are approximately of the same order, around 15%.  So even if every single person in Sri Lankas prisons was a Tamil (Tamils are under represented in the prison population), it still would not equal the brutal inequality that the US metes out to its black African American minorities.

Lets do a mental exercise. Consider Internal Displaced Persons (IDP's) as per 100,000 population of Sri Lanka. (note:  IDP's are not prisoners, they are free to leave. Unhappily their homes are in places with mines, homes that have been destroyed or in High security zones).  There are at maximum 73,700 IDP's (as of July 2015) in Sri Lanka according to the  Internal Displacement Monitoring Centre (IDMC).  IDP's then are 369 per 100,000 of Sri Lankas population.   Even so less than half the prison population of the US.

Thats a staggering 7,451 IDP's per 100, 000 population  for whom the US is responsible in Iraq, Afghanistan and Libya.  What is the US doing about it.
Every week we hear of a black person being shot by the police. There are more black men in the U.S. prisons than the total prison population in India, Argentina, Canada, Lebanon, Japan, Germany, Finland, Israel and England combined.
I don't think the US treatment of minorities is one that Sri Lanka should emulate.  If any the US should learn from Sri Lanka.

We can forgive not too smart Bush of continuing to ignore the consequences of his policies and action of his "War on Terror".
However, the self-righteousness and hypocrisy of the "anti war" Nobel prize winning Obama and Pulitzer Prize winning Samantha Power is simply astounding. Both two intelligent people in ther self rightesoness simply ignore their culpability in the misery and wretchedness they have wrought on millions in Libya and Iraq among other places. Not only do they disown their culpability but continue to pursue policies of interference, which will lead to more destabilization and misery.
Posted by sbarrkum at 11/26/2015 01:08:00 AM No comments: Links to this post

Payback is a Bitch (Paris Massacre)

Indira Gandhi/India armed and trained the LTTE. They went on to assassinate Rajiv Gandhi.
The July 83 riots allowed the LTTE become become stronger and better funded and resulted in a 30 year war.

Europe and France were instrumental in overthrowing Gaddafi. Now Libya is a failed state and one of the gateways for migrants and refugees to enter Europe in the millions.

My heart goes out to the victims and families. The average Joe who is having to bear the consequences of the US and Europe's politicians support for terrorists in Syria.


What Preceded The Islamic State Attacks In France - Some Links


Gunmen and bombers attacked restaurants, a concert hall and a sports stadium at locations across Paris on Friday, killing at least 120 people in a deadly rampage that a shaken President Francois Hollande called an unprecedented terrorist attack.

The Islamic State claims responsibility (English version) for the attack.
But who weaponized and financed the Islamic State or prior organizations in Syria and Iraq from which this terror attack grew? Is this cartoon justified? Cartoon of the day by Carlos Latuff
Consider:
In 2012 - Hollande admits arming Syrian rebels in breach of embargo - book


The French president has admitted delivering weapons to the Syrian rebels during a period of EU embargo, a new book about to be published in France reveals. The deliveries took place in 2012, before the embargo was canceled in May 2013, according to François Hollande's last year interview with journalist and writer Xavier Panon. "We began when we were certain they would end up in the right hands. For the lethal weapons it was our services who delivered them," Hollande told the writer, ...


WASHINGTON — Most of the arms shipped at the behest of Saudi Arabia and Qatar to supply Syrian rebel groups fighting the government of Bashar al-Assad are going to hard-line Islamic jihadists, and not the more secular opposition groups that the West wants to bolster, according to American officials and Middle Eastern diplomats.


France has emerged as the most prominent backer of Syria's armed opposition and is now directly funding rebel groups around Aleppo as part of a new push to oust the embattled Assad regime. Large sums of cash have been delivered by French government proxies across the Turkish border to rebel commanders in the past month, diplomatic sources have confirmed. The money has been used to buy weapons inside Syria and to fund armed operations against loyalist forces.


President Francois Hollande said on Thursday that France had delivered weapons to rebels battling the Syrian regime of Bashar al-Assad “a few months ago.” 
[T]wo of the most successful factions fighting Assad’s forces are Islamist extremist groups: Jabhat al-Nusra and the Islamic State of Iraq and Syria (ISIS), the latter of which is now amassing territory in Iraq and threatening to further destabilize the entire region. And that success is in part due to the support they have received from two Persian Gulf countries: Qatar and Saudi Arabia. Qatar’s military and economic largesse has made its way to Jabhat al-Nusra, to the point that a senior Qatari official told me he can identify al-Nusra commanders by the blocks they control in various Syrian cities. But ISIS is another matter. As one senior Qatari official stated, “ISIS has been a Saudi project.”

France benefited from its support for the U.S.-Wahhabi regime change project in Syria and Iraq by getting huge orders for military equipment from the medieval Wahhabi regimes:
Apr 2015 - France and Qatar seal $7 billion Rafale fighter jet deal


Qatar has agreed to buy 24 Dassault Aviation-built Rafale fighter jets in a 6.3-billion-euro (4.55 billion pounds) deal, the French government said on Thursday, as the Gulf Arab state looks to boost its military firepower in an increasingly unstable region.

Even after it became obvious for everyone that the regime change project in Syria has led to an expansion of terrorism Hollande was still demanding the end of the Syrian state.
Sept 2015 - François Hollande of France Says Assad Must Go


President François Hollande of France told the United Nations General Assembly on Monday that his country would “shoulder its responsibilities” in global efforts to end the fighting in Syria, but that the conflict could be resolved only if President Bashar al-Assad was removed from power.

Quartz is mined in Sri Lanka and exported mainly for the use in the micro chip/silicon wafers in the semi conductor industry.  There is very little value addition even though some of the mining companies are BOI.  Basically the women workers break the stone into little pieces and then it is crushed into powder and exported.

Powdered Quartz is Rs. 3,600 (~US $ 32) a ton whereas one kilo gram of the purified product is worth nearly US $ 50,000 according to an article in the Asian Tribune. This same article reports on a proposal for a semi-conductor plant to be built by Toyota. Wonder what happened to that project.

In terms of value addition and providing jobs its worse than tea/rubber estate workers. How can this be an BOI investment when Sri Lanka is getting pennies in value addition.

So what is Quartz:
Quartz  it is SiO2 or sand in a special crystal structure. Quartz is the second most abundant mineral in the world. However, naturally occurring quartz crystals of extremely high purity needed for growing silicon wafers in the semiconductor industry is rare. In Sri Lanka there are formations where 99.9% pure quartz is available.  These quartz and and other gem formations are associated with metamorphic rocks and are thought to have happened 1,000-3,000 million years ago during the creation of Rondina the “mother” of all subsequent continents.

When quartz has impurities in its crystal structure then colored gems such as citrine, rose quartz, Amethyst and Topaz are formed. See this article for more info on color centers (natural or artificial) that will make quartz a valuable gemstone.

Sri Lanka has very good value addition for quartz and related stones as gems. Read this article (and many more) from the Gemological Institute of America  for a good overview of the gem industry in Sri Lanka.

Email ThisBlogThis!Share to TwitterShare to FacebookShare to Pinterest
Labels: Economy 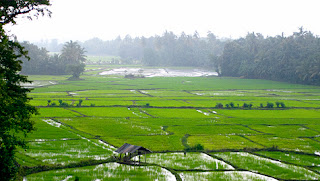 Just a few hours ago Jack Point had an article against Tariffs that protect the local farmer.  One of the arguments he uses are the Corn Laws of 1840''s that protected aristocrat large landowners in the UK.

For a start there is no comparison because Corn Laws were protective for large aristocrat landowners in UK, whereas most agricultural land in Sri Lanka are small holdings of about 2-3 acres (except Tea/Rubber).
Note: Sri Lanka has one of the highest population densities  #43, (309/km2, 800/km2), and one of the lowest rates of urbanization with a 15% urban population # 191 out of 198

The other is that Jack Point is probably unaware of the history prior to the creation and repeal of Corn Laws.

In point form,
Win win situation for the Oligarach/aristocrat/Factory Owner.
Similar laws were enacted in the US too to ensure urbanization and cheap factory workers.

All that Free Market stuff is bullshit.

In Sri Lanka, most land holdings are small holders 2-3 acres. When you see large acres  of paddy land it does not belong to a single owner.  There would be many owners in this paddy tract, Also agricutural workers are not just 24% of population.  Many Govt workers, police officers/constables, private sector employees in cities towns except for Kandy/Colombo  have an acre or two, typically paddy land in their ancestral villages.  They would not be classified as agricultural worker, even though they take leave and go and work on planting and harvesting.

Yes, rice and other agricultural produce is cheaper from India Pakistan and Bangaladesh.  And produce imported is taxed for revenue and hopefully protect agriculture in Sri Lanka.

At least one of the reasons for  cheap agricultural produce from India Pakistan and Bangaladesh is because large land holdings with dirt cheap labor in those countries.

Every cottage shall have his porcyon [portion, ie plot of land] assigned to him according to his rent, and then shall not the riche man oppress the poore man with his catell, and every man shall eate his owne close at his pleasure.
Posted by sbarrkum at 11/01/2015 02:37:00 AM No comments: Links to this post