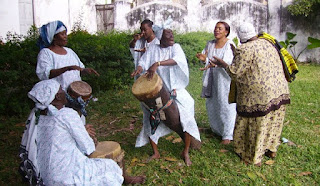 Recently saw a music video by Bi Kidude (Little Granny) from Zanzibar.  I was struck by the similarities to Sri Lankan Kaffiringha or Manja music and old traditional music as in Panama Vannam and Yak Thovil. 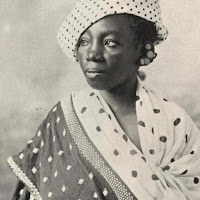 Award for her role in the culture of the Zanzibar Island.  The iconic artist sadly passed away on April 17th, 2013.   She very well might have been a century old. (see more here and video documentary“As old as my tongue – The Myth and Life of Bi Kidude” by director Andy Jones). In Bi Kidude's words, I smoke, drink and sing.  Not bad for a life to a hundred years.

So here is one music video by Bi Kidude. A few other links, Dancing,  Traditional Drums, and her Voice range (Alminadura)

Manja Music of Sri Lanka
Its the music of the Kaffirs (not a derogatory word in Sri Lanka). They were brought mainly by the Portuguese from Angola and Mozambique. The Tabbowa/Sirambiadi community in the west coast is a mix of African descendants and Sinhalese.  Their music is now very much part of the Sri Lankan tradition.  Below the group Ceylon African Manja performing in their village.  This is youtube clip of the same group in a more formal setting.

Sri Lankan Traditional Music
A gravel voice and rhythms (as against melody) define traditional music. Immediate below women playing the rabane,  a instrument played by women at village events, specially Sinhalese New Year.  This particular video is from a five star hotel !!.

Second below the traditional Gajaba Wannama (dance of the King’s Tuske) with a modern dance ensemble.  More Wannamas here.

Unheard of a couple of decades back, upper middle class girls/women playing the drums, or for that matter a traditional instruments.  Now we have and all girl/women traditional drumming (watch it is good, their website http://www.thuryaa.lk/). The times are a changing.

Thanks Mohamed Rizwan for linking the Bi Kidude video, Anton James for identifying Bi Kidude.
Posted by sbarrkum at 4/28/2018 10:42:00 AM No comments: Links to this post